Henry Darger: The Certainties of War

Like many people throughout the world, Chicago-based artist Henry Darger (1892–1973) lived a life touched by military conflict. Darger was born on the anniversary of the first battle of the American Civil War, and throughout his life he collected images, articles, and novels pertaining to the subject. In the fall of 1917, he was drafted into the U.S. Army to serve in World War I. Though Darger never saw combat and spent only a few months in training before receiving an honorable discharge due to poor health, his awareness of the realities of war remained undiminished, particularly as they affected the youngest victims: children.

In late 1909 or early 1910, Darger began writing a version of what would eventually become his 15,000-page illustrated masterwork, The Story of the Vivian Girls, In What Is Known as the Realms of the Unreal, of the Glandeco-Angelinnian War Storm, Caused by the Child Slave Rebellion (often referred to asIn the Realms of the Unreal). The novel focuses on the adventures of seven sisters—the Vivian Girls—fighting for the Christian nation of Angelinia in an effort to stop the country of Glandelinia from continuing its practice of child slavery. Darger’s text and visual art present an allegorical tale in which children, both as victims and as saviors, remain caught in the serious business of war.

Darger’s monumental work occupied him well into the late 1960s, and although Civil War history may have provided initial inspiration for the project, the global scale of twentieth-century warfare prompted his ongoing response. Conflicts in Mexico, China, Spain, and Cuba; World Wars I and II; the Korean War; and Vietnam all made military operations an undeniable part of the contemporary culture, as daily newspapers and pictorial magazines such as National Geographicand Life brought the troubling results of combat into the homes of millions of Americans. Wrapped in a veneer of fantasy, In the Realms of the Unreal reflects a society struggling with the overwhelming results of modern warfare.

To create his visual art, Darger borrowed from popular-media sources to overcome his lack of formal drawing skills. Tracing images onto paper, Darger wove together carefully assembled compositions then filled in the line drawings with watercolor to produce the final results. At times, Darger painted directly over photographic reproductions from magazines and other printed source material, changing the appearance and dress of the original figures or transforming actual military scenes into images that fit his fictional narrative. The paintings and ephemera presented here—newspaper photographs, political cartoons, Darger’s 1917 draft notice, a commemorative postcard book of Camp Logan, in Houston, that Darger saved from his time in basic training, the artist’s 1917 honorable discharge papers, his 1943 application for a war ration book, and an unused book of ration stamps—which were culled from the extensive archives of the museum’s Henry Darger Study Center, are intended to offer insight into the possible motivations for Darger’s chosen themes and act as a reminder of the depth of emotion military conflict can elicit from those inside and outside the war zone.

“Henry Darger: The Certainties of War” is supported in part by the Leir Charitable Foundations in memory of Henry J. & Erna D. Leir; the Gerard C. Wertkin Exhibition Fund; the New York City Department of Cultural Affairs; and with public funds from the New York State Council on the Arts, celebrating 50 years of building strong, creative communities in New York State’s 62 counties. 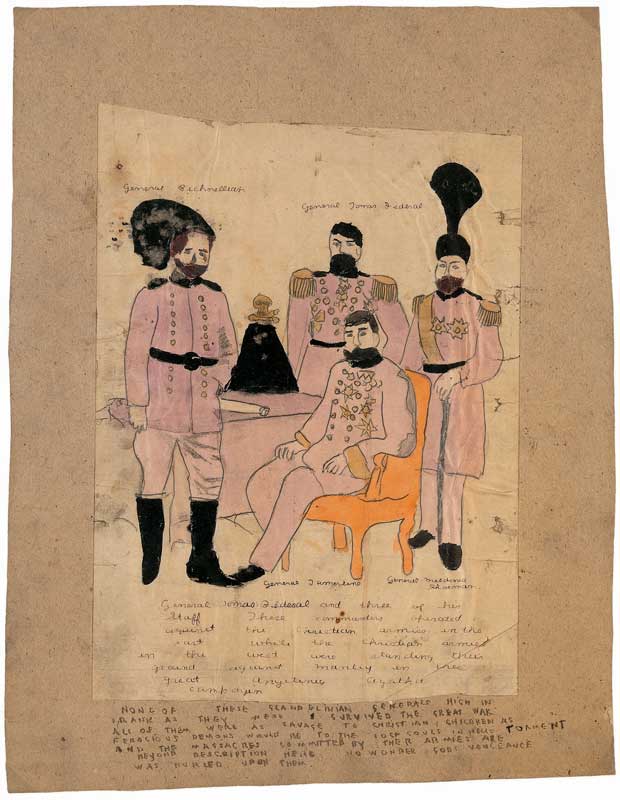 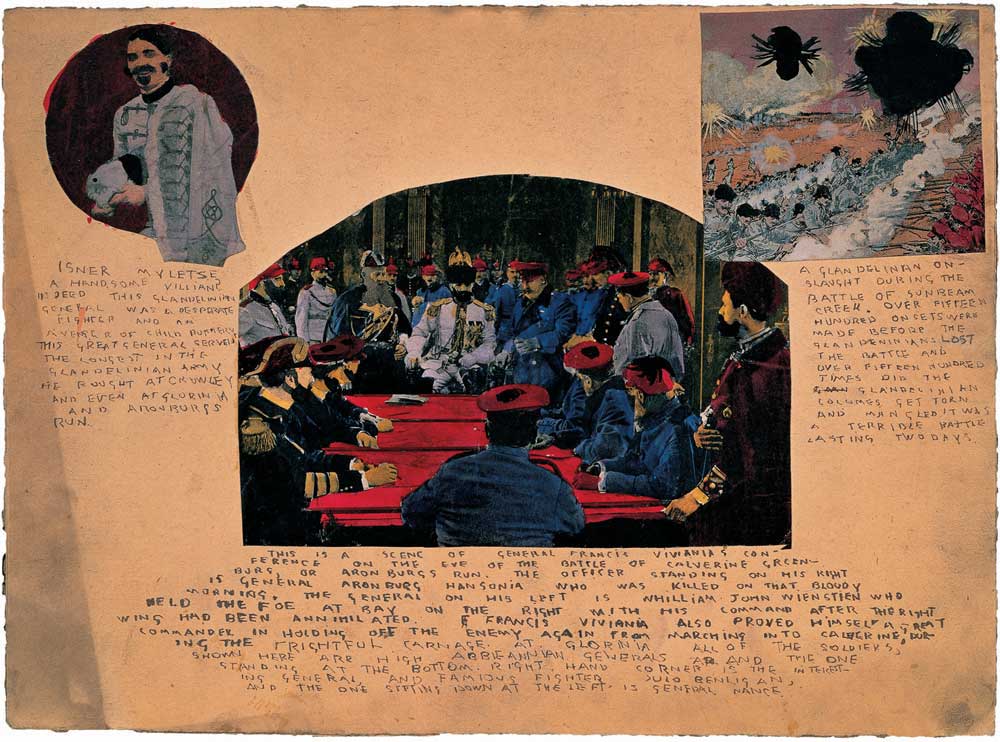 “Henry Darger: The Certainties of War” is supported in part by the Leir Charitable Foundations in memory of Henry J. & Erna D. Leir; the Gerard C. Wertkin Exhibition Fund; the New York City Department of Cultural Affairs; and with public funds from the New York State Council on the Arts, celebrating 50 years of building strong, creative communities in New York State’s 62 counties.

Available at the museum shop.

Available at the museum shop.